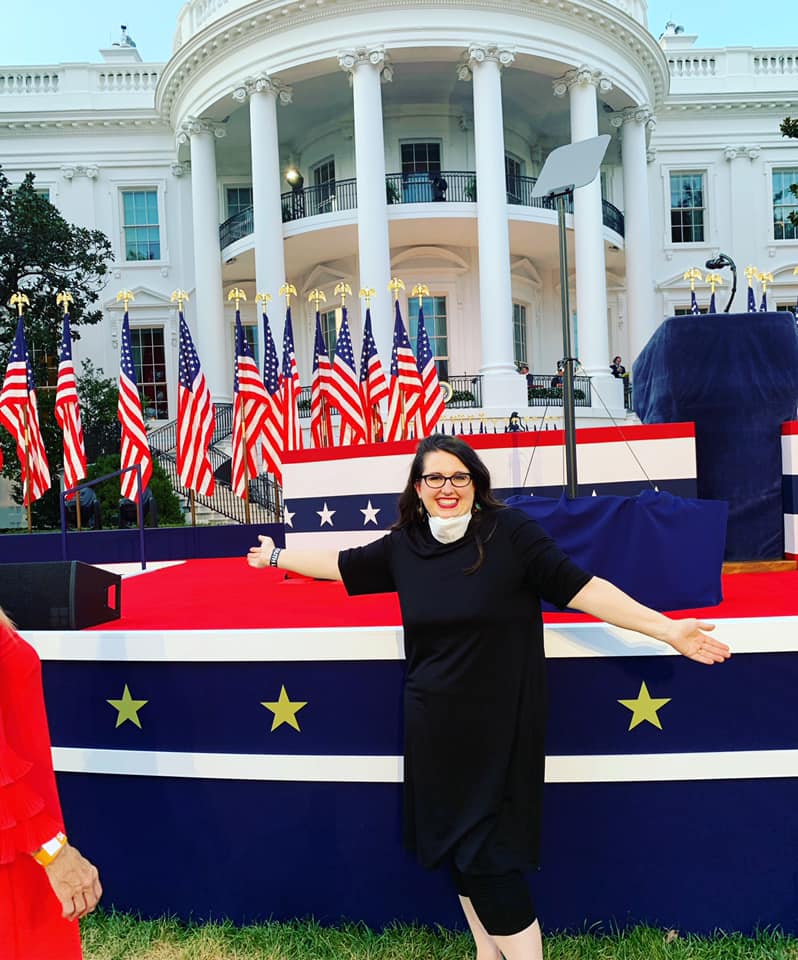 My First-Hand Encounter with “Peaceful Protesters” in D.C.

Last night, I was honored with an invitation to join President Trump at the White House to watch him give his acceptance speech at the RNC. To be honest with you, I debated whether my presence really mattered. I had to drive from Pittsburgh and immediately drive home, meaning 8 hours in the car. But I had a feeling I should be there for this historic moment.

However, I don’t think God wanted me at the White House last night. I think what he wanted me to see what was outside when the event was over. When my friend, Christina, and I exited the White House gates, we weren’t greeted by the usual flurry of traffic with Ubers or taxis waiting to take us somewhere.

No, we were “greeted” by a line of policemen in body armor, wielding shields, holding protesters at bay. I found myself next to legendary Notre Dame football coach Lou Holtz, a man from my hometown, and next to a Supreme Court Justice’s wife, looking for ways home (safely).

As BLM protesters yelled racial slurs at my black friend, we walked with Coach Holtz until he was reunited with his driver. And then we began a 5-block journey in the streets of the capital after midnight by ourselves. As someone who protests for a living (actually peacefully), I wasn’t terrified. But I’m pretty sure most everyone else was. I was definitely on high alert.

We were walking as fast as we could, looking for police officers who we knew we could run to for assistance, if needed. That’s when I saw all the businesses in our capital. Windows boarded up, bars and restaurants silent, protestors in black, smoking weed and screaming. It looked like I had been dropped into a city in the middle of a revolution.

And I think if we are all being honest with ourselves, we are living in midst of a revolution. And the thought I find most devastating, is that I don’t know how exactly we will end this and reunite our nation. When young men and women feel morally justified in walking up to other human beings, fellow countrymen, to hurl insults, scream, and make obscene gestures, simply because they disagree over how we can best take care of our country, our citizens. How will we ever go back to how it was again?

Already, the abortion industry, the Black Lives Matter organization, and the radical left has said that they will not cease their anarchy until our President is kicked out of office. They’re planning a 50-day “siege” of the White House starting on September 17 running to Election Day.

I know now why God prompted me to go to Washington yesterday. It wasn’t to take pictures on the White House lawn or see many of my friends for the first time in months also in attendance. It was to see the devastation and depravity in our streets. This served as a wake-up call to me and now hopefully to you, too.

Because what’s at stake this November is not simply who gets to appoint the next Supreme Court Justice (although we know how important that task is). What’s at stake is our very existence as a country.

Have you spoken about the importance of this election to those you know? Are all those you know who have a Christian worldview registered to vote and have transportation to the polls? Have you volunteered to make phone calls or knock on doors to speak with neighbors about what is truly at stake?

Tomorrow, my staff and I will be on the ground in a city that is notorious for riots, stabbings, shootings, robberies, and other violent crimes. After seeing the chaos in Washington, D.C. last night, I have to keep our plans under wraps or else I’d be inviting attacks from Antifa thugs.