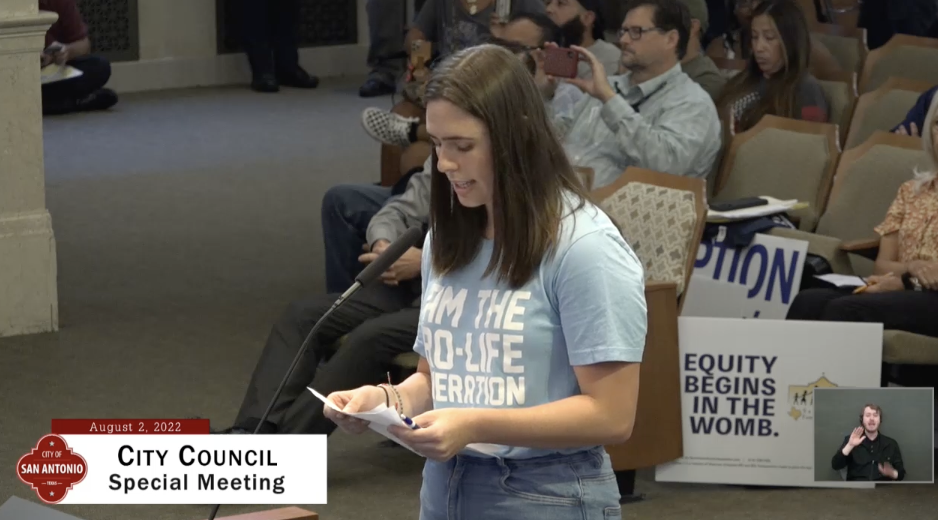 SFLA Testifies to Save Lives in San Antonio 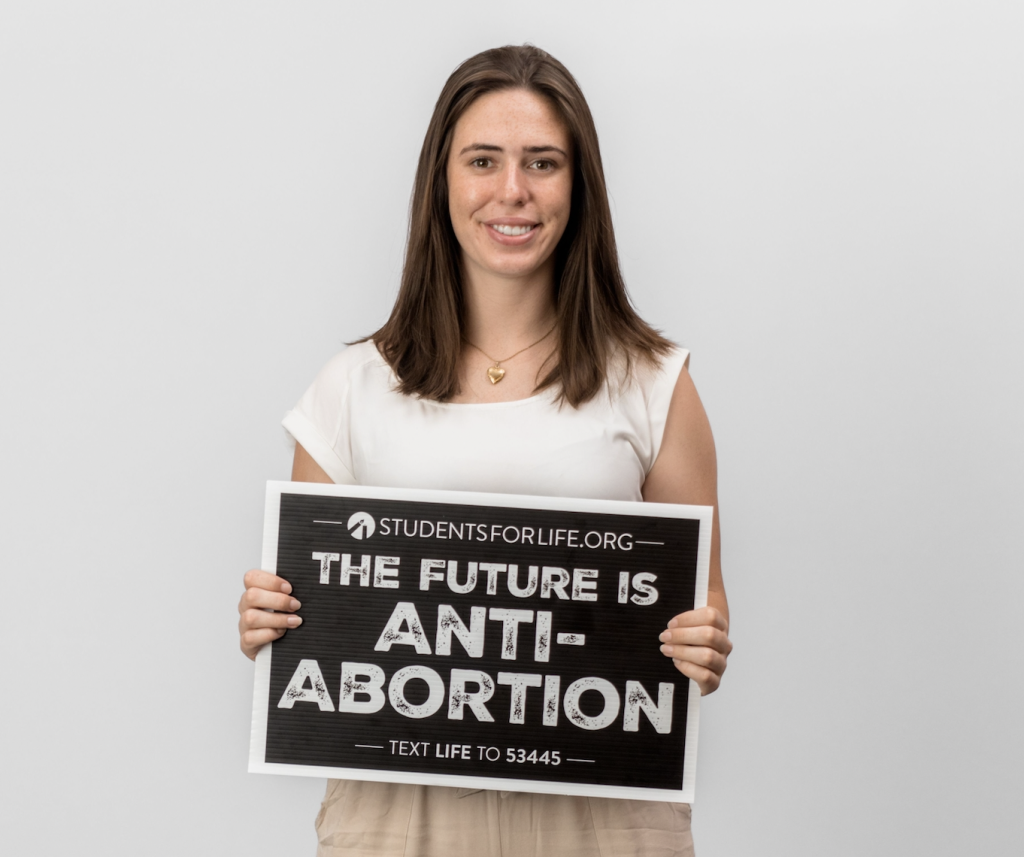 GUEST POST: In all my training with Students for Life Action (SFLAction), I have been taught to act quickly and boldly when a situation arises — and on July 28, 2022, when I found out that the San Antonio City Council was adding a special session to pass a pro-abortion resolution, I got to work immediately.

The resolution was very similar to that which was just passed in Austin, Texas. It stated that the San Antonio City Council intended to support abortion during the 88th Texas Legislative period and recognized that the District Attorney has prosecutorial discretion to choose whether he prosecutes abortion cases. While this resolution was largely toothless, I knew the vulnerable preborn of San Antonio still deserved a voice so within an hour, I had mobilized the Pro-Life Generation to act.

I felt comfortable jumping into a leadership role on this mission because, just a couple days prior, our SFLAction Texas Regional Coordinator Faith Elwonger and our Regional Manager Sarah Zarr had hosted an emergency training on how to navigate these city council meetings. With their guidance, my group and I felt comfortable getting to work. 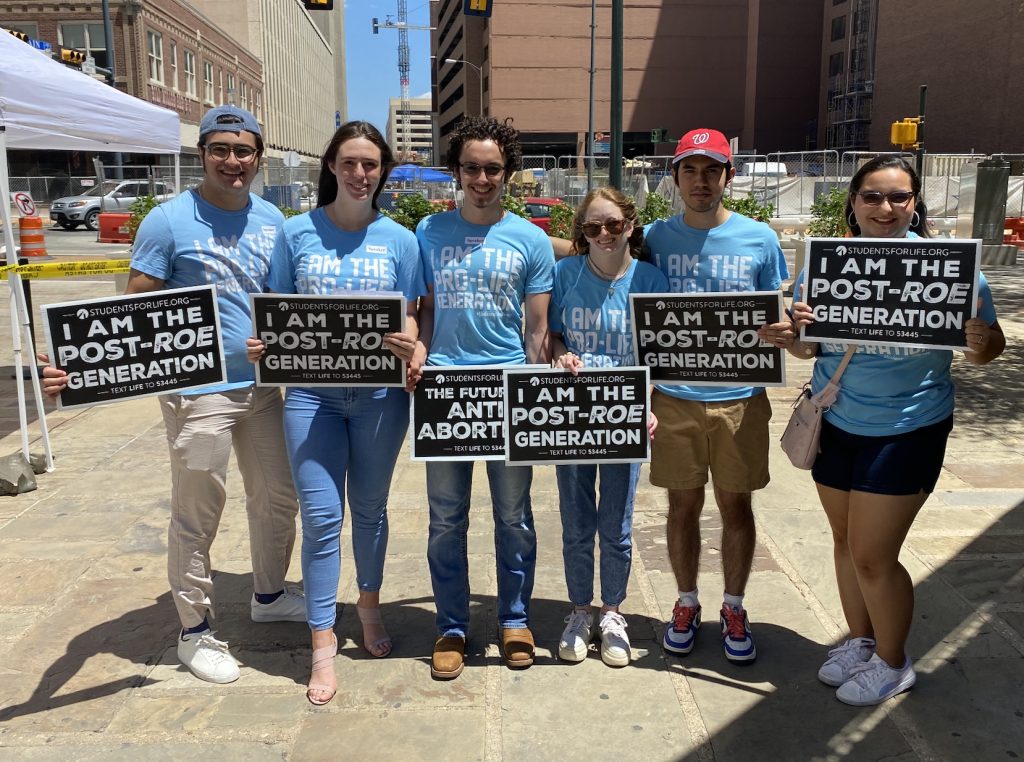 I began by creating a flyer and posting it on my SFLA group’s social media accounts, messaging pro-life groups throughout San Antonio and Texas in general, and contacting local pregnancy resource centers. After I made these connections, my group and I hosted a life chain outside the San Antonio City Council Chambers. We encouraged those walking by to testify against the resolution, and we fortunately had three people sign up. We stayed outside in the Texas heat for more than an hour, holding pro-life signs and wearing our “We Are The Pro-Life Generation” shirts.

When the session started, we came inside, and the tension in the room immediately rose with the first pro-life testimony as booing, swearing, and verbal abuse from the abortion lobby ensued. It was sad to watch the discrimination of the pro-life viewpoint from the council members, as well. The mayor was tolerating the crude yelling and gestures from pro-abortion individuals that interrupted our testimonies, but when a pro-lifer spoke up to tell them to be quiet, the mayor would interject.

When it was our turn to speak, the Vice President of SFLA at the University of Texas San Antonio Pedro Björn Ovin Suarez centered his testimony on how all the Planned Parenthoods in San Antonio are placed in Hispanic neighborhoods and a quick drive from the university and high school campuses. People screamed that he was lying and that abortion helps minority groups — but does that mean they think minority groups are less qualified to be parents? 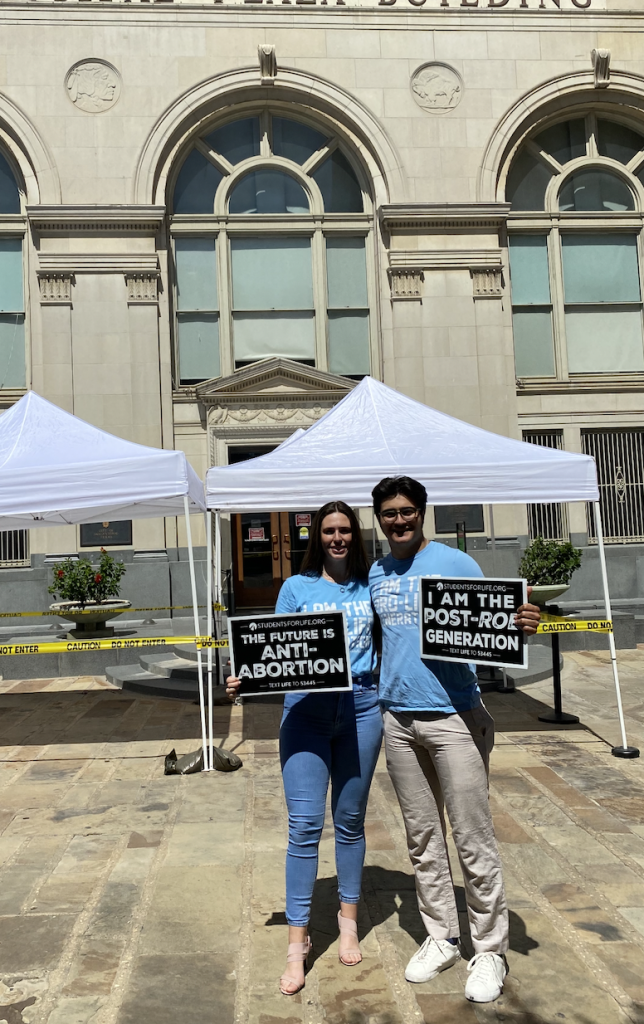 During my testimony, I expounded on what our organization does and how the city council should focus instead on helping women succeed by providing them with the resources to raise their children. I also explained the real violence of abortion through anecdotes that had personally resonated with me, including a young father’s story about Chemical Abortion pills shared with me one day on campus. His wife had taken the abortion pills, and her bathroom floor was covered in blood as a result — and their dead child was on the floor, as well. They had to pick up their dead baby and flush it down the toilet as Planned Parenthood had instructed them, and the experience continued to haunt their lives.

After speaking, we left before the vote happened, and unfortunately it passed 9-2. I received, however, multiple messages telling me to watch the video of the meeting because the council members were talking about my testimony. I am glad that my words had an impact  even though they couldn’t sway the decision.

Galaxy Acton, President of Students for Life at UTSA

I am also beyond proud of every pro-life individual that had the courage to stand before the council members and speak the truth. Clearly, the truth was too difficult to hear for some as multiple council members would leave the chambers while we spoke and wouldn’t look us in the eyes while we were speaking.

I encourage everyone — young and old — to challenge your city’s leadership if they are considering a pro-abortion resolution. We have to look them in the eye and be honest: abortion is wrong , and our cities shouldn’t condone or encourage such violence. While we may not win the first time, we are always planting pro-life seeds and being a voice for the voiceless.