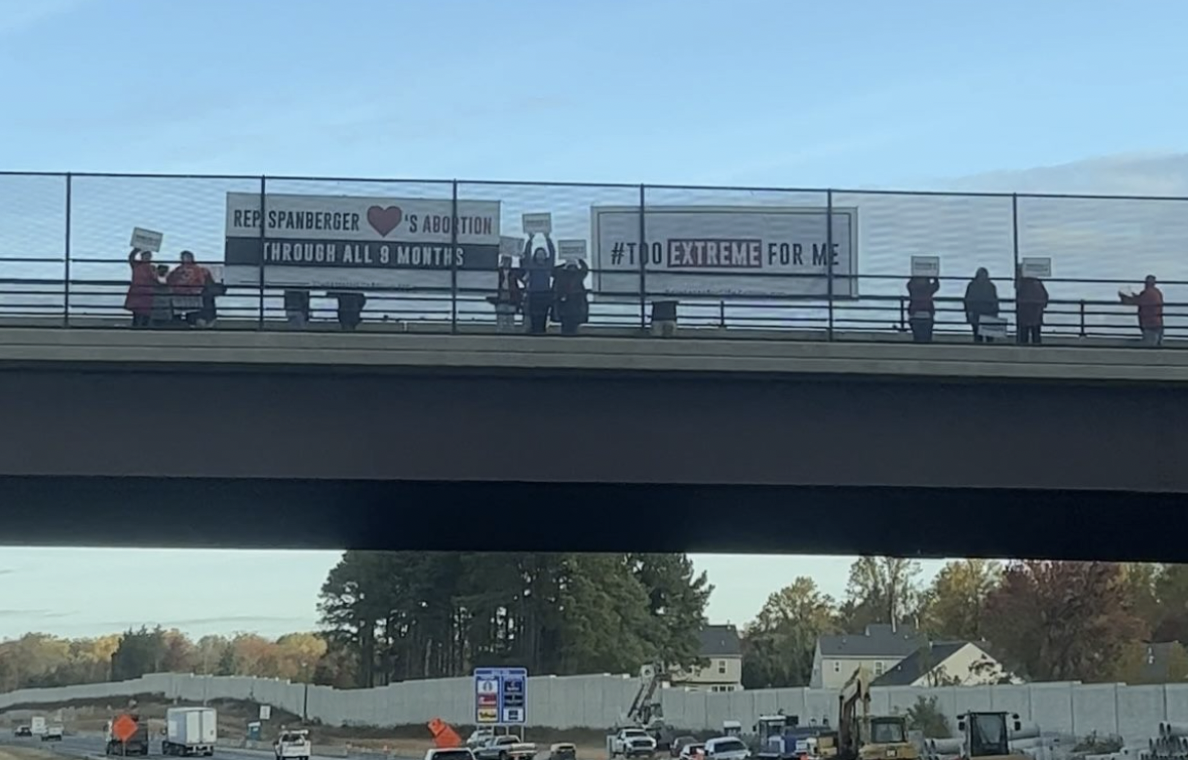 JUST IN: Overpass Outreach Updates from the Field

This fall, Students for Life Action (SFLAction) announced an exciting new campaign called Overpass Outreach in response to the wave of pro-abortion leaders running for office. The Pro-Life Generation has since taken to their cities to display signs at the peak of rush-hour that uncover the way leaders actually vote on abortion.

Groups in Arizona, Georgia, Illinois, Michigan, Minnesota, Ohio, Pennsylvania, and Virginia took part in the campaign. Here’s a look at some displays and a few exciting updates from SFLAction telling their cities which leaders have abortion policies that are #TooExtreme4Me:

Tom Usle, SFLAction Upper Midwest Regional Coordinator, applauded the Pro-Life Generation for mobilizing in Illinois – after all, it’s not a simple task to pull an event like this off! His team arranged the display banners across the overpass on Highway 59 in Naperville to warn residents and commuters of the radically pro-abortion incumbent candidate, Rep. Sean Casten. Casten has not been shy about his support of abortion legal through all nine months for any reason. Usle explained,

“To inform voters quickly and effectively, we connected with local student groups and community members to display banners across the highway in his district on October 25th and 26th during the peak of rush-hour.” 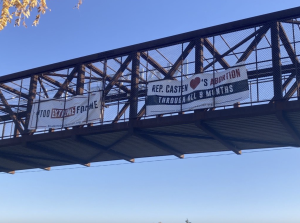 Despite unexpected rain and shifting volunteers, Usle’s team was able to use zip ties and a little bit of diligence to still get the banners displayed for all on the highway to see. “Regardless of the circumstance, the pro-life movement doesn’t waver in its conviction to fight against the atrocity of abortion,” said Usle.

We’re proud of this team who navigated changes and still got the job done!

SFLAction has been busy in the Peach State, confronting candidates’ not so peachy policies for the preborn. Cori Woods, SFLAction Southeast Field Operations Coordinator, noted the positive response her team of pro-lifers received during their Overpass Outreach. 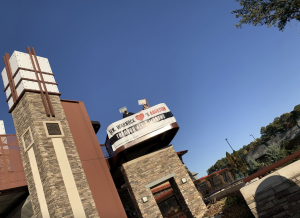 “People were rolling down their car windows and thanking us for fighting for pro-life issues,” Woods noted. While the vast majority of residents received their #TooExtreme4Me message well, there were of course a few people who thought crude hand gestures and name calling would accomplish something productive (it doesn’t).

Nevertheless, SFLAction staff and volunteers handled themselves with respect and grace as they boldly informed residents about the pro-abortion candidates seeking office in Georgia. We couldn’t be prouder! 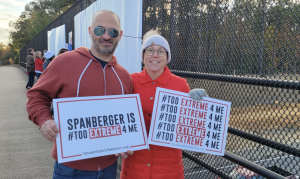 The city of Fredericksburg is known to some as a “sleeper city” because so many people commute from Fredericksburg to Washington, D.C. for work. Needless to say, northbound traffic is heavy in the morning, which made this the perfect opportunity to reach thousands of key voters with the truth about candidate Abigail Spanberger’s pro-abortion extremism.

Malicious ads have been attacking Spanberger’s pro-life opponent in this district over the past few months, putting words in her mouth and painting her in a negative light. From Hulu to Spotify to iPhone games, ads have been placed against her in every place imaginable.

SFLAction was very eager to have this chance to reveal the truth about the Spanberger, who supports abortion through all nine months of pregnancy. About 20 pro-lifers gathered together to pull this Overpass Outreach off. 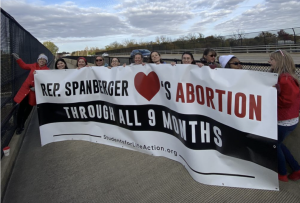 Marlowe’s group had two banners that they zip tied to the overpass, reading: “Rep. Spanberger Hearts Abortion Through All 9 Months” and “Too Extreme for Me.” They also had handheld signs with the same message.

If you’ve ever done grassroots activism by a road, you understand that the effectiveness of such activism is often measured by the ratio of received thumbs-ups to middle fingers. Thankfully, the Fredericksburg group received almost all encouraging honks and gestures!

Want to get involved with SFLAction? Sign up for our next activism trip HERE before the election to inform residents about pro-life candidates!

READ NEXT: Gubernatorial Bullies oppose Babies and all kind of Basic Freedoms, as an All-Female Cast of Pro-Abortion Candidates Flounder