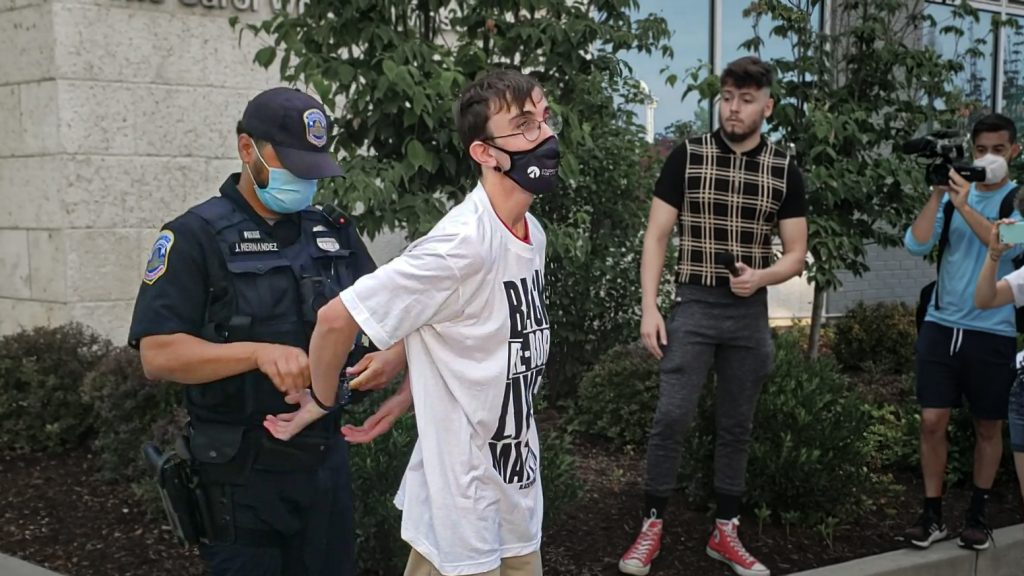 “The abuse of power by D.C. officials against students holding nothing but chalk should offend and concern everyone,” said Student for Life of America’s Kristan Hawkins. “Pro-life Americans should be applauded for peacefully protesting the violence of abortion, not penalized.”

WASHINGTON D.C. (10-01-2021) – This week, Students for Life of America (SFLA) and The Frederick Douglass Foundation  (FDF) through their attorneys at Alliance Defending Freedom filed an appeal of their dismissed free speech case,  dealing with attempts to chalk BLACK PREBORN LIVES MATTER in Washington D.C. as part of a peaceful event. The key issue for the judge who dismissed the case seemed to be that the pro-life students and leaders were peaceful.

U.S. District Court Judge James Boasberg presided over the case and in March of this year refused to grant SFLA and FDF a preliminary injunction so that they could chalk the life-affirming message, as the case was ongoing. He said at that time the reason he could refuse to allow pro-life Americans the same access and freedoms Black Lives Matter protestors had enjoyed was because of a key difference.

As the Washington Times reported: “Thousands upon thousands of impassioned Americans poured into the tight streets in front of the White House in early June, many of whom came to protest law enforcement of the very type that would have been tasked with curtailing the painting,” said Judge Boasberg in his ruling. … “While enforcing the Ordinance may have led to a cleaner street, it all too easily could have transformed a then-peaceful gathering into something far less sedate, with considerable risk to the safety of both civilians and dramatically outnumbered law-enforcement personnel,” he said.

“He contrasted the atmosphere with the ‘comparably tranquil scene’ at the Aug. 1 pro-life protest, calling it a ‘far less chaotic gathering outside a Planned Parenthood for which at most 49 people were expected to show.’”

Click here for a video at Breitbart comparing how pro-life Americans were treated in Washington D.C. compared to Black Lives Matter protestors.

On Sept. 1, 2021, Judge Boasberg dismissed the case entirely, writing in part that the peaceful pro-life speech could be suppressed because our free speech efforts were not “part of ongoing, large-scale, and national demonstrations.” (SFLA’s react to that ruling, here.)

“Where has Judge Boasberg been for the last almost 50 years, as pro-life Americans have march in the streets and prayed in front of abortion vendors from the moment that Roe v. Wade was wrongly decided, and abortion was forced into law? Pro-Life Americans have stood together as a national movement for decades,” said Hawkins. “Looking at his two rulings in this case, he seems to believe that protesters who destroy property are entitled to more constitutional protection than peaceful protestors. Pro-life Americans should be applauded for peacefully protesting the violence of abortion, not penalized.”

“Every American deserves for their voice to be heard as they engage in important cultural and political issues of the day,” said ADF Legal Counsel Elissa Graves. “What kind of message are D.C. officials sending when they censor and arrest those with whom it disagrees? We have seen a new level of hypocrisy and discrimination from government officials as they bless certain messages prominently displayed in the city and ban others from even being temporarily chalked on a sidewalk. Members of the Frederick Douglass Foundation and Students for Life of America have the freedom and right under the First Amendment to express their views like everyone else; we hope the appeals court will swiftly take up this critical free speech case.”

In 2018, the U.S. Supreme Court wrote in its decision in National Institute of Family and Life Advocates v. Becerra that “the people lose when the government is the one deciding which ideas should prevail.”

ALSO ON-GOING: The cases against the two students arrested have not been heard. An update on their legal actions here.

For more information on what occurred during the August 1, 2020, attempted chalking and arrest, click here.

To learn more about our efforts to address the racial injustice of abortion, visit BlackPrebornLivesMatter.

At Newsweek: read more from Hawkins and Toni Peterson on why we must be free to speak in defense of minority lives. In USA Today, read more on Sanger’s racist past from Hawkins.