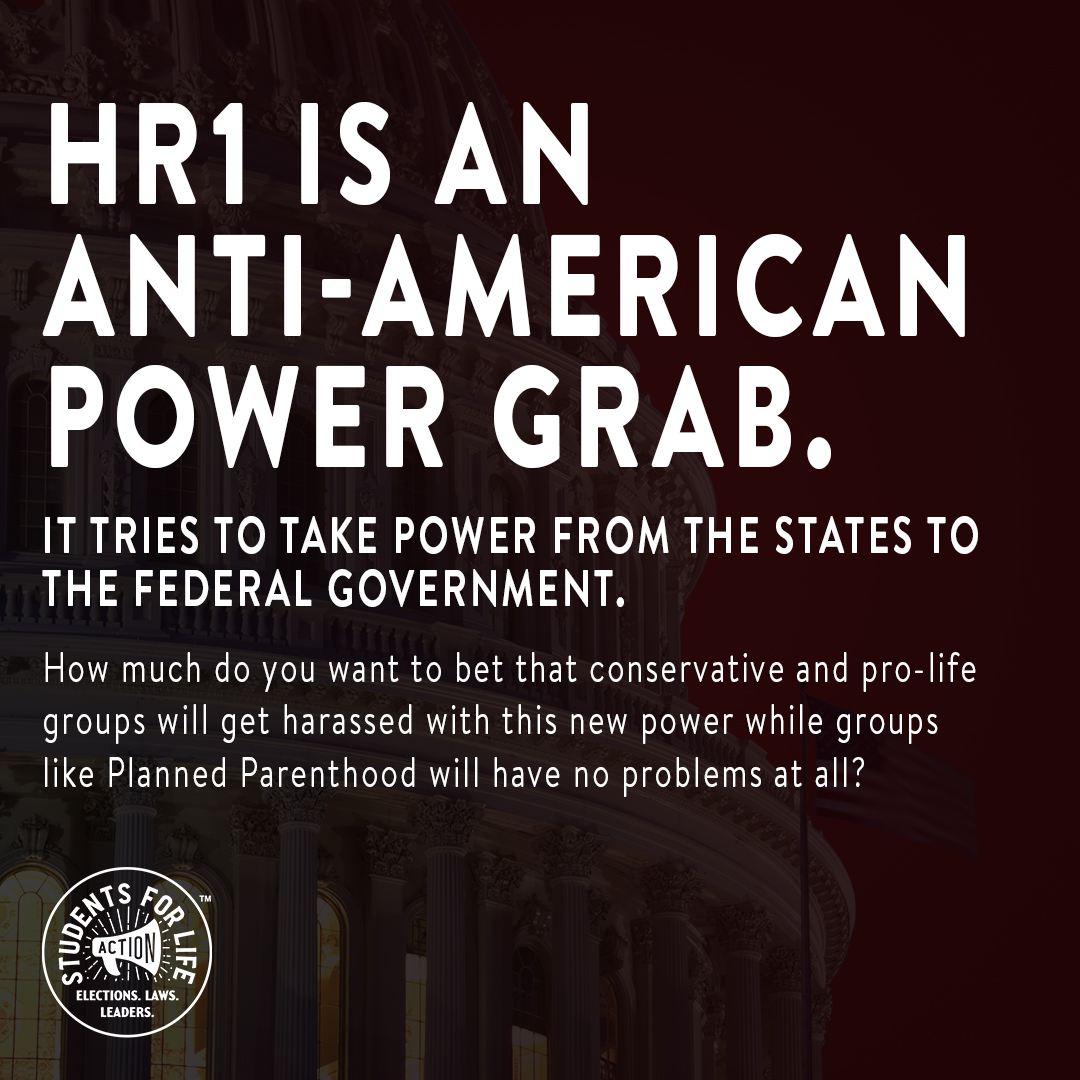 HR 1 is Being Called the “For the People” Act, but Which People?

HR1 takes power and authority from people and states, putting control of elections into the hands of a few powerful people in Washington D.C. This would attempt to interfere with people’s historic engagement with non-profits and charities of their choosing, all because some politicians don’t like what others choose to get involved with. Pro-abortion politicians want to attack WHAT non-profits can say, WHEN they can say it, and find out WHO supported them. If we have learned anything about woke cancel culture, we know all too well that the Left will eviscerate those supporting causes they don’t like.

Millions of Americans value the opportunity and our right to support causes we believe in without fear of harassment and intimidation. The identities of people who contribute to non-profits would be searchable in a government data base, allowing them to be harassed by those with different points of view. Also, even more regulations on speech would be added, making online communication more difficult and more open to attacks.

Check it out here. This 791 page, left-leaning wish list outlines how they wish to change elections and non-profits in America – two things that have hindered a radical agenda. From the Public Interest Legal Foundation, this bill would radically change the election laws in this country by federalizing election laws – something that the Constitution says should be dictated by state laws passed in legislatures.

These changes are radical and undermine election integrity. Election Integrity Impacts Us All: Americans risk losing Free and Fair Elections as last-minute changes and unknown people voting can have a huge impact on who has power in Americas … but another risk is to our ability to support causes we believe in. Free speech and engaging in the issues of our day is fundamental to our national identity. For example: Our Founding Fathers even spoke against Great Britain using pen names that allowed them to speak freely.

This is a Federal Power Grab, but not the first proposed this year. Consider Codifying Roe which is a radical proposal to take the issue of abortion from the states to put into federal law to allow abortion through all 9 months, for any reason at all and sometimes with taxpayer funding, and with the intent of not allowing states to limit abortions or handle it differently. HR1 wants to do something similar – take from the states their Constitutional rights and responsibilities of handling elections and change election laws to operate with few limits, designed to protect the votes of all. And take from non-profits their rights to freedom of speech and assembly.

As noted in a coalition letter opposing HR 1 that SFLA President Kristan Hawkins signed for United for Privacy:

In particular, H.R. 1 and S. 1 would impose onerous and unworkable regulatory standards on the ability of individual Americans and groups of Americans to discuss the policy issues of the day with elected officials and the public. This bill would also violate the privacy of advocacy groups and their supporters and stringently and excessively regulate political speech on the Internet.

Their Petition: “Supporting causes we believe in without having to report it to the government has been a cherished principle in America since our founding” … oppose any and all efforts to undermine private charitable donations.”

It is clear that this act is not “For the People,” but should instead be called “For the Powerful People” who want control of who votes in elections and who speaks. This is an anti-American power grab that tries to take power for the states to the Federal Governmet. It appears likely that conservative and pro-life groups will be the main target of harrassment while pro-abortion groups like Planned Parenthood and NARAL will slide by unscathed.

Now YOU can take action. Head to NoHR1.com to ask your elected officials to vote NO to HR 1.