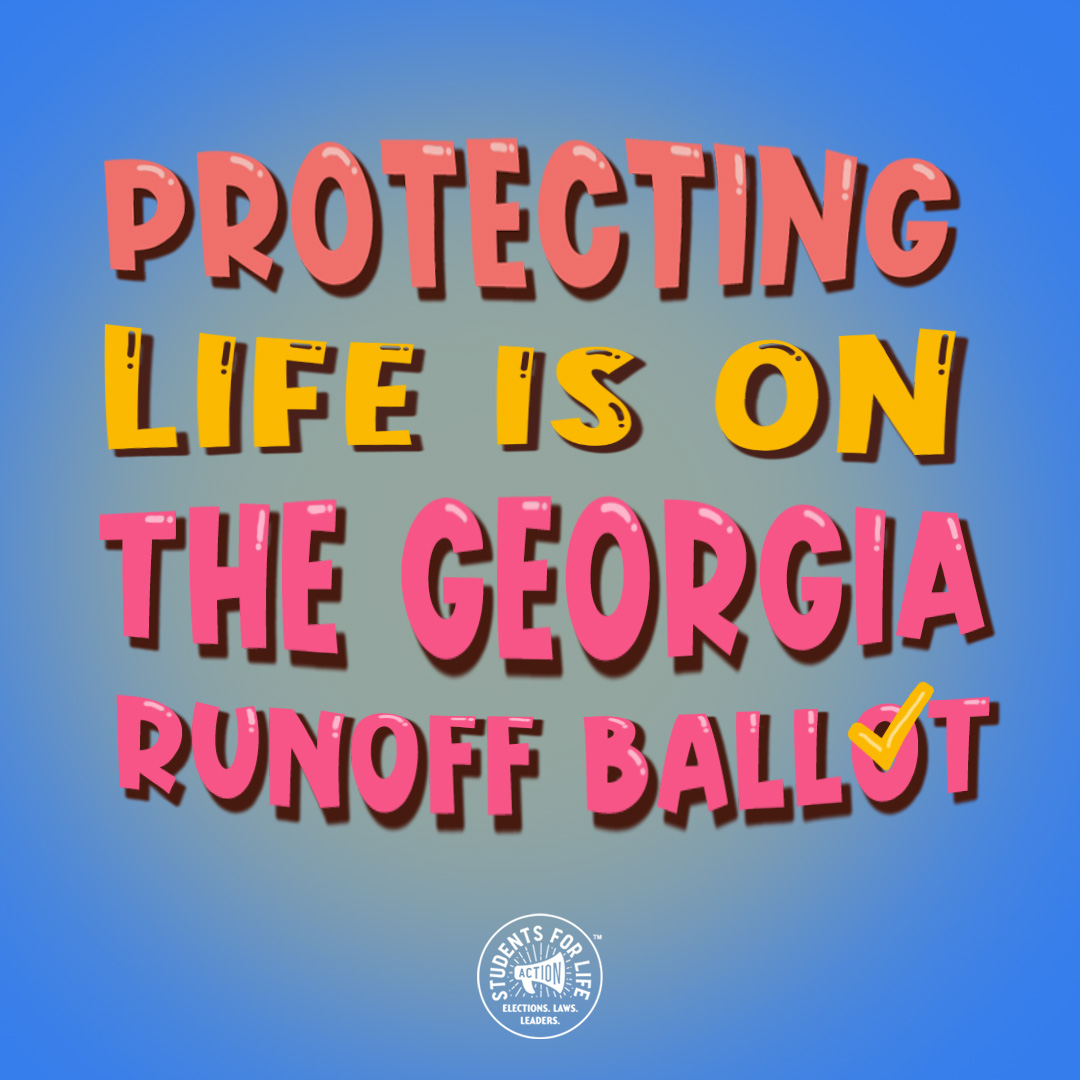 SFLAction is Protecting Lives in Georgia

“With Democrats already pledging to force taxpayer funded abortion into law and choosing a radical abortion-supporting nominee, called an ‘Anti-Trump attack dog’ by the New York Times, to head up healthcare at HHS, an anti-life agenda is clearly emerging,” said SFLAction’s Kristan Hawkins. “The U.S. Senate must balance the radical activism proposed by extremists who pledge to remake society in their image, with taxpayer funded abortion at home and abroad their Day One agenda.”

ATLANTA, GA, & WASHINGTON D.C. (12-29-2020) – Students for Life Action (SFLAction) President Kristan Hawkins announced that starting this weekend, more than 200 staff and students will be in Georgia engaged in get-out-the-vote efforts because the “life and death stakes in this race makes voting pro-life first the responsibility of every Georgia voter.” SFLAction has been focusing on voter engagement in the 18-29 demographic in the general election with great success as more young voters showed up at the polls. That effort will continue in Georgia through in-person discussions (as possible), on-line outreach and digital advertising. “It all comes down to Georgia and Students for Life staff and students will make the case to vote pro-life first as already Planned Parenthood and radical abortion extremists are bragging about their shopping list for taxpayers,” said Hawkins.

Efforts to increase the Youth Vote were very successful in the general election, in which SFLAction focused on mobilizing Millennial and Gen Z activists. In 2016: 13 percent of voters were under 30, with 58 percent for Clinton and 28 percent for Trump. In 2020: the under 30 vote was 17 percent of the total, with 36 percent for Trump and 60 percent Biden. But the youth vote in Georgia was even higher as:
“Data shows more young people voted in Georgia on average than the rest of the country during the general election. Now, voting groups are trying to get those voters, and more, back for the runoffs … Data from the Center for Information and Research on Civic Learning and Engagement shows young people between 18 and 29 contributed 20 percent of all votes in Georgia. That’s higher than the national average of 17 percent … Data from CIRCLE shows the top issues that drove young Democrat votes to the polls were racism and climate change whereas young Republicans were more concerned with the economy and abortion.”

The issue of abortion is front and center in the Georgia race as GOP candidates Kelly Loeffler and David Perdue note in an op-ed about the abortion positions about both of their Democratic rivals. In addition, more than 25 Black pastors signed a letter to Democratic candidate Raphael Warnock, calling on him to stop using the Bible to advance his abortion support.

SFLA/SFLAction Minority Outreach and Healthy Relationships Director Toni McFadden discussed the issue of race in this election cycle in an op-ed at Townhall, where she observed.

“The same harm of slavery continues today as another class of people are robbed of their human right to life—the preborn—and it is for them that I fight. And once again, people of my race suffer more greatly because of what Roe v. Wade currently allows. Consider that ‘the abortion rate for black women is almost five times that for white women,’ according to the Guttmacher Institute …
Do you know what the No. 1 killer of Blacks is? It’s not black on black crime, police brutality, guns, drugs, or heart disease cancer. It’s abortion, which has killed more of us than AIDS, accidents, violent crimes, cancer, and heart disease combined.”

For more on SFLAction efforts in Georgia, visit https://studentsforlifeaction.org