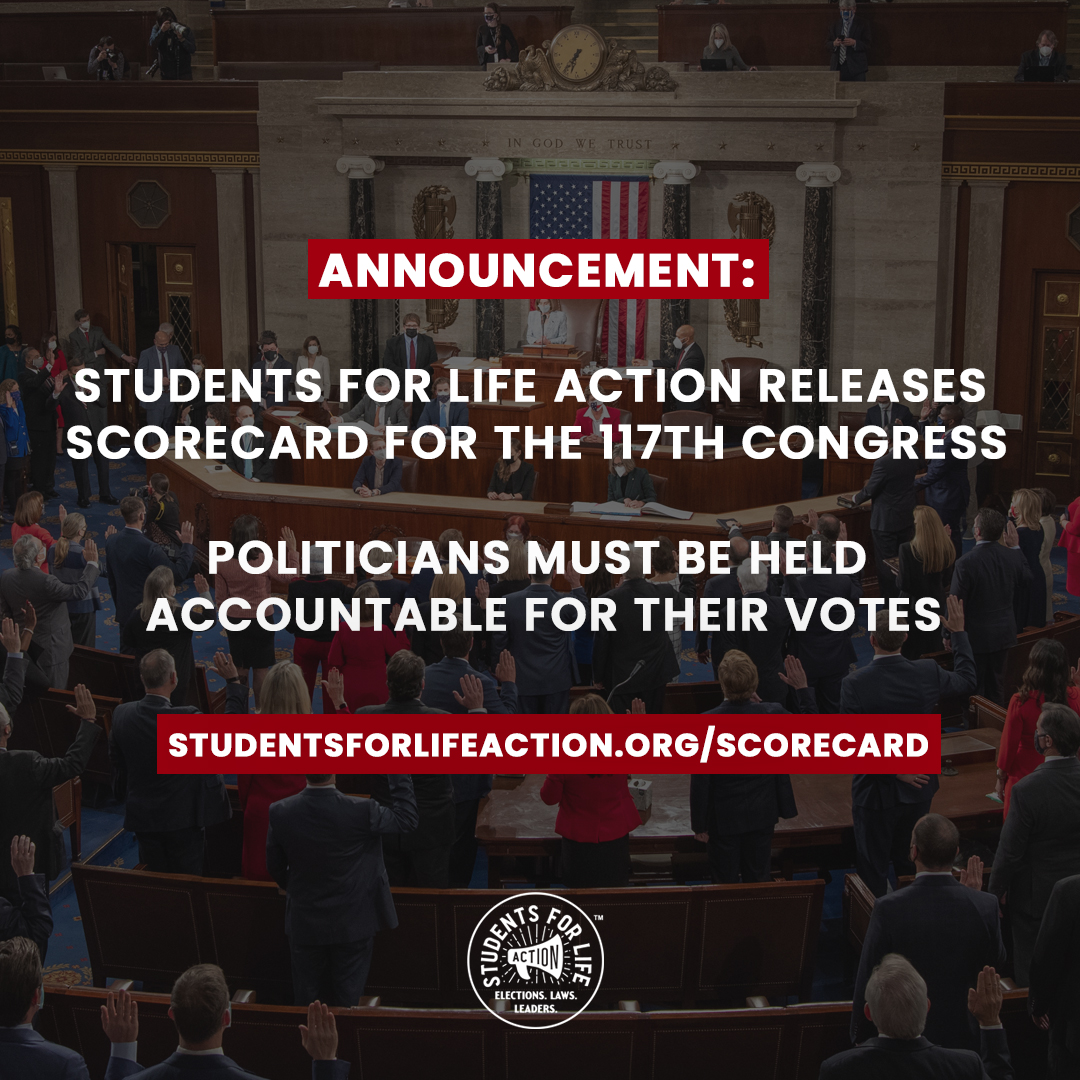 “The Pro-Life Generation’s reaction to the razor thin election margins and fragile political environment is to hold those in office accountable for what they do on the human rights issue of the day – abortion,” said SFLAction’s Kristan Hawkins. “SFLAction’s newly launched Pro-Life Generation Scorecard will be a tool for evaluating those who weigh in on abortion and on policies that will help mothers and their children, born and preborn, in a Post-Roe America.”

One of the First Scored Votes: Vote NO on the confirmation of Xavier Becerra to head the U.S. Department of Health and Human Services.

WASHINGTON D.C. (01-08-2020) – Students for Life Action President Kristan Hawkins announced that in the coming 117th Congress, Students for Life Action would track votes in a newly launched scorecard developed on the foundation of Students for Life of America’s Blueprint for a Post-Roe America, that included prominent pro-life signatories when first released. This August, SFLA and SFLAction circulated a blueprint that both detailed defensive measures that need to be taken, such as defunding Planned Parenthood and defending life-affirming healthcare, and proactive measures to support mothers and their children, born and preborn. Hawkins noted that the SFLAction Pro-Life Generation Scorecard would bring a unique perspective, “Our SFLAction Scorecard will have a weighted score, like AP Classes for example, in which direct abortion-related votes will be most significant, but other issues will be scored for their service and support to mothers and their children, born and preborn.”

Hawkins continued: “Mid-term elections are especially significant when one party controls so much of our government, and this scorecard will offer practical information to pro-life activists nationwide. Students for Life Action was launched to capitalize on the desires the Pro-Life Generation in all 50 states who want to add direct political engagement on the issue of abortion to their outreach to women who are directly targeted by abortion vendors. Our efforts first focused on state races and now is gearing up for a more focused, federal presence.”

FIRST UP: Students for Life Action will score any confirmation vote on Xavier Becerra, the California Attorney General who has made using the force of law against pro-life people and organizations a reoccurring misuse of the law. This December, SFLAction led a coalition effort in which more than 40 of the top pro-life and pro-family leaders including SBA List, the Family Research Council, March for Life, National Right to Life and many others signed a letter to the U.S. Senate urging a no vote on his confirmation as head of HHS. Read more here.

Writing at the Washington Examiner, Hawkins discussed the needs for a comprehensive, pro-life plan. She observed, “Roe v. Wade will ultimately collapse because it was built on the shifting sand of seven justices’ opinions, lacking legal, scientific, and political foundation. And when that happens, it will be up to all of us to have in place a plan, a blueprint for a post-Roe America, in which caring for the least of these is a goal as important to us all as the goal of ending judicially imposed abortion on demand.”

Hawkins and former Gov. Scott Walker also discussed this in an op-ed at RealClearPolitics, titled “In a Post-Roe World, Pro-Lifers Equip Families to Succeed,” where they note: “Conservatives have a long history of defending the preborn, mothers, fathers and struggling families with policies designed to empower them. It’s an abortion mentality that throws in the towel, saying there is no hope, so get rid of the child. It’s pro-family conservatives who care enough to equip people with what they need to prosper.”

For more on SFLAction’s engagement during 2020 and 2021 elections, click here to read about our engagement in Georgia and here for our results and extensive engagement in the general election.