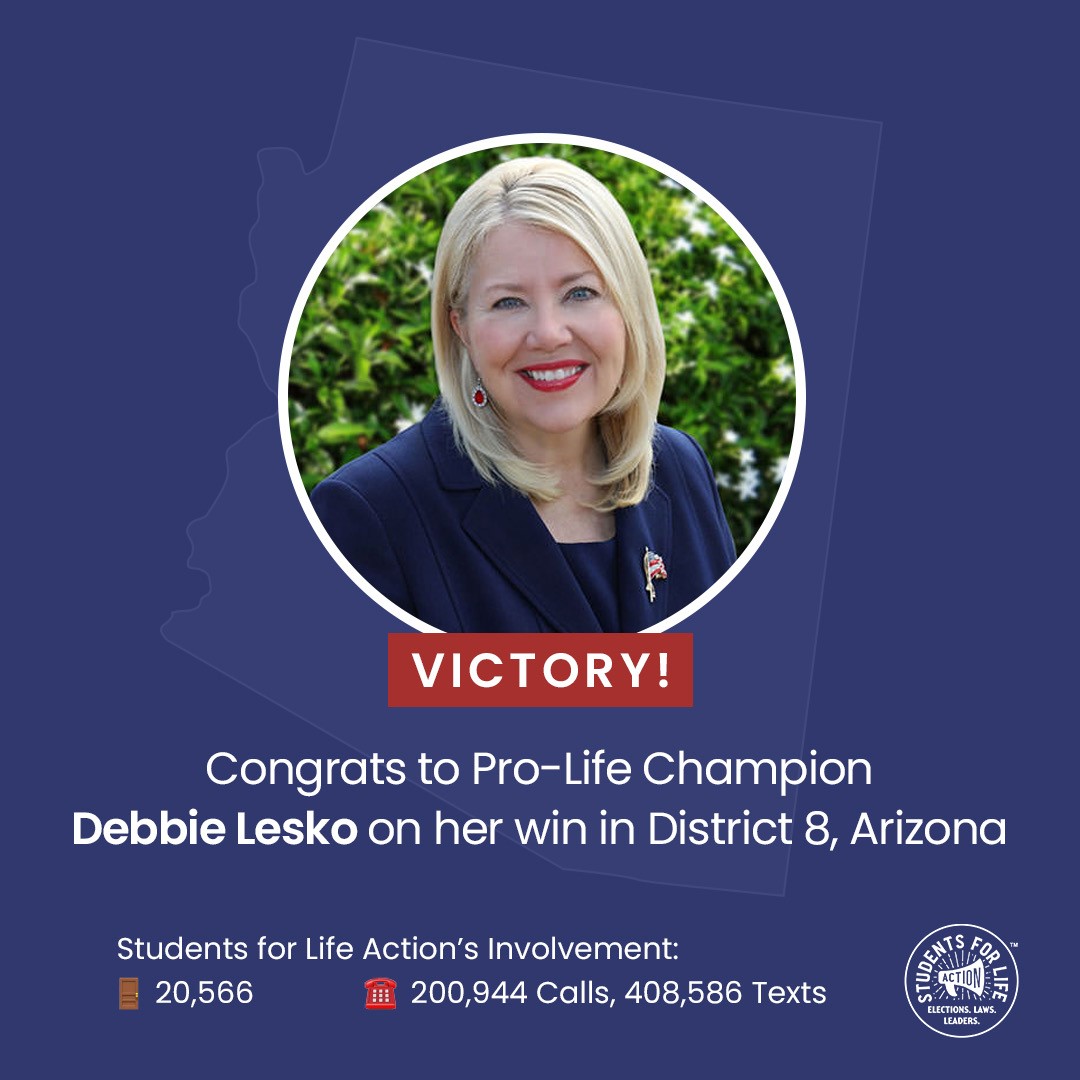 “The Pro-Life Generation devoted hundreds of hours of time and talent to educating Arizona voters on Rep. Lesko’s pro-life record,” said SFLAction President Kristan Hawkins. “We are so excited to see her headed back to Washington to defend the preborn for another term.”

“There is bipartisan agreement that this election cycle was one of the most important of our lifetimes, with the potential to impact millions upon millions of present and future lives,” said SFLAction President Kristan Hawkins. “It is clear that the work SFLAction did this cycle contributed immensely to the most critical victories in the country. Rep. Lesko’s victory tonight is one example of that. The Pro-Life Generation went on the front lines in this election, to have a voice and a vote for life.”

In months leading up to the election, SFLAction led two major student activism weekends in Arizona to make voters aware of Rep. Lesko’s consistently pro-life record and urge them to #VoteProLifeFirst this election cycle.

In the final stretch, SFLA/SFLAction launched a new, 6-figure campaign buy in a 48-hour GOTV blitz this Monday and Tuesday designed to rally voters aged 18 to 35 to #VoteProLifeFirst. To accomplish this 48-hour GOTV blitz, SFLAction made more than 1.5 million personal text messages to cell phones, sent nearly 900,000 voicemail messages to land lines as well as launched a five-digit ad buy on social media. Among those contacted in this blitz were 273,000 new voters who were considered swing voters on the life issue as well as more than 1 million pro-life, yet low propensity voters who hadn’t voted early this fall in the following 9 states: Arizona, Colorado, Iowa, Florida, Michigan, Montana, North Carolina, Pennsylvania, and Wisconsin.

In October, SFLA/SFLAction went from Alaska to Florida in a 10-state #Justice4Life tour on behalf of now Justice Amy Coney Barrett an extension of the SFLAction Activism Weekends that included more than 731,000 voters contacted. SFLAction conducted similar student trips over the summer, knocking on more than 50,000 doors and making more than 200,000 phone calls to educate voters in Arizona, Michigan, North Carolina, Virginia, and Kansas before key Republican and Democratic primaries.