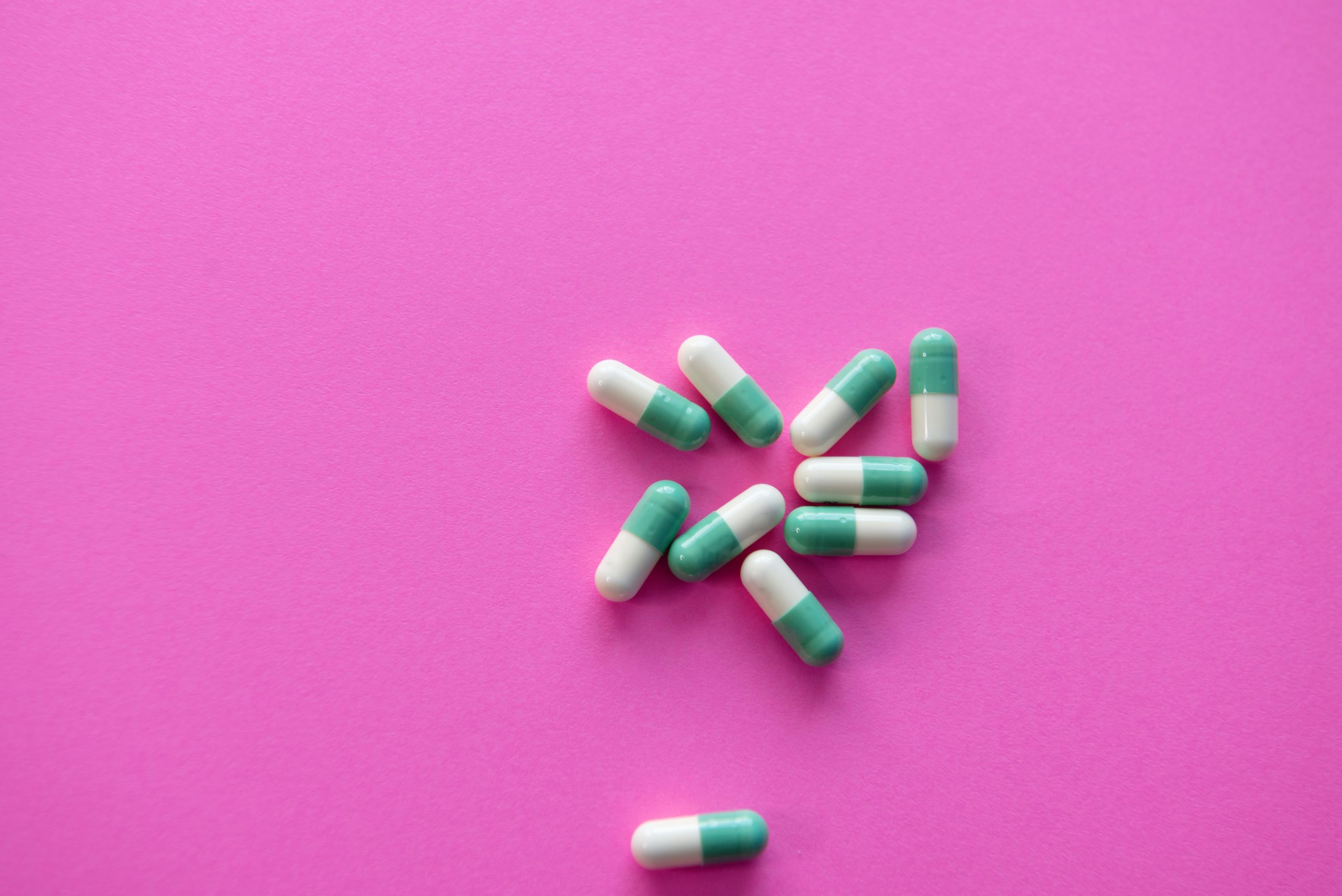 “State legislators have been pro-life champions this year, fighting for new laws that stop on-line pill pushing, as Corporate Abortion and its political allies have tried to sell women death by mail as a cynical response to COVID-19,” said SFLAction’s Kristan Hawkins. “Our student leaders have testified, texted, called and knocked on doors to urge each state to prioritize women’s needs over abortion vendors’ profits.”

WASHINGTON D.C. (04-27-2021) – Students for Life Action President Kristan Hawkins released a checklist of 14 states taking leadership to confront the deadly on-line Chemical Abortion Pill market, a priority effort for SFLAction and the Pro-Life Generation this legislative session. Students for Life of America first engaged politically on this issue when California worked to require that Chemical Abortion Pills be sold in every California publicly funded college and university health centers. SFLAction released the graphic as Montana this week became the first state to sign into law SFLAction championed Chemical Abortion legislation.

While other states are considering their response to the reckless distribution of Chemical Abortion Pills, these states have led the way this session, including: Alabama, Arizona, Arkansas, Indiana, Iowa, Kentucky, Massachusetts, Maryland, Montana, Oklahoma, Ohio, Texas, West Virginia, and Wyoming.

“Selling death-by-mail has been a long-term strategy for Corporate Abortion, which now ends more than 40 percent of preborn life with Chemical Abortion Pills,” Hawkins noted. “What’s new, in light of changes at the FDA, is selling these life-ending drugs without prescreening or follow up care, putting women at risk of injury or death as well as the loss of their fertility along with their baby.” 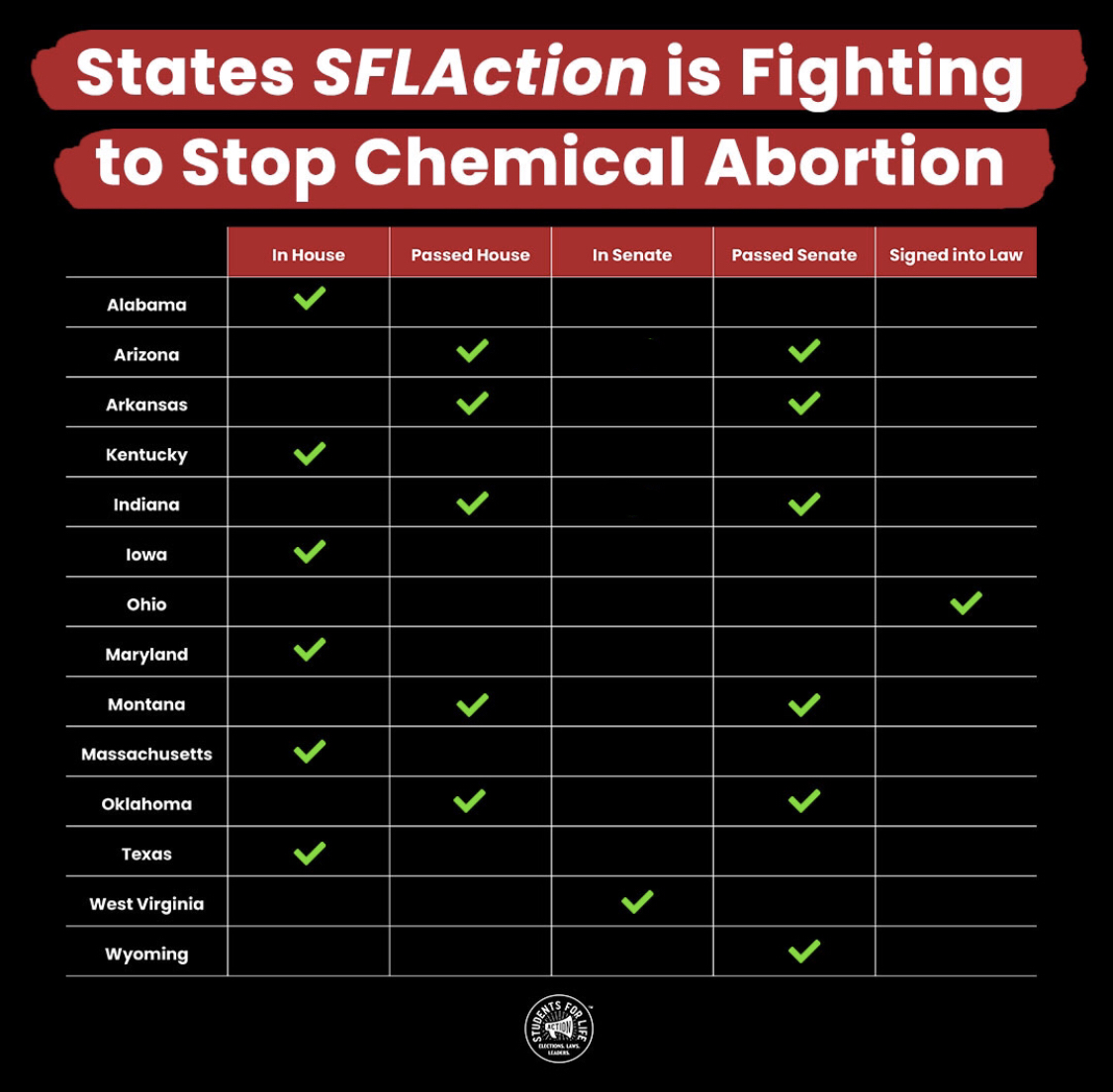 Since leading the fight in California, SFLAction has also been working on Capitol Hill to address the crisis in the making because the FDA, now under the control of the Biden Administration, dropped health and safety standards for Chemical Abortion Pills. This radical change was justified in the name of COVID. Members of Congress have been pushing back against these new, radical proposals, advocating for things like the Support and Value Expectant (SAVE) Moms and Babies Act.

With no National Abortion Reporting law in the U.S., it’s easy for Corporate Abortion to withhold the facts about abortion’s full impact. In their recent letter to the FDA, federal lawmakers noted that while information on the many harms of Chemical Abortion is limited, the known complication rate of 3 to 8 percent would mean that 120,000 to 320,000 women faced “severe, life threatening, and fatal events.”

Sen. Steve Daines joined in the letter and was a co-author of an op-ed in Newsweek with Hawkins detailing the current crisis and how political activists are playing politics to advance abortion.

They wrote: “The Biden administration’s chemical abortion gambit also reveals a deep hypocrisy. Consider that on the same day news was breaking about the gutted health and safety standards for chemical abortion, the FDA also announced it was pulling the Johnson & Johnson COVID-19 vaccine because, out of 7 million people who had taken it, six had suffered blood clots and one person died. Yet despite the fact that chemical abortion pills have been a factor in the deaths of more than 20 women and millions of unborn children, Biden’s FDA not only kept the drugs on the market, but authorized, in effect, a nationwide experiment in do-it-yourself abortions. There was no semblance of an “abundance of caution” in the FDA’s abortion pill announcement.”

The risks for women are extreme: “Far from being a safe and easy way to end a precious preborn life, chemical abortion pills lead to complications four times as frequently as surgical abortion. Pregnant mothers need to be screened in person for ectopic pregnancy and the age of their baby, as well as for blood type, because women’s fertility can be lost if they are Rh-negative and go untreated after an abortion. They must also be examined after taking the chemicals because of the risk of infection from an incomplete abortion. And they need to be protected from abusers who have given such drugs to women without their knowledge and consent.”

Learn more about how Chemical Abortion harms women and preborn children at THISISCHEMICALABORTION.com.

Stay up to date on the Pro-Life Generation’s engagement in state legislation at https://studentsforlifeaction.org.

Students for Life Action (SFLAction) is the 501c4 sister organization of Students for Life of America (SFLA), the nation’s largest, pro-life, student organization with more than 1,240 groups on middle, high school, and university campuses in all 50 states. Students for Life has more conversations with those most targeted by the abortion industry every day, week, and year than any other pro-life outreach in the world and mobilizes the Pro-Life Generation to confront abortion at the local, state, and national levels daily. Every week, Students for Life entities reach more than 2 million people across social media platforms to have nearly 200,000 digital conversations with the most engaged pro-life online audience in the world.

Students for Life of America (SFLA) is the nation’s largest, pro-life, youth organization. Headquartered in Fredericksburg, VA, SFLA serves more than 1,240 groups on college and university, middle and high school, medical and law school campuses in all 50 states. Student pro-life organizations work to confront policies on their campuses to support pregnant and parenting students, to end Planned Parenthood’s relationships with schools and communities, and to change minds of their peers about abortion. SFLA has more conversations with those most targeted by the abortion industry every day, week, and year than any other pro-life outreach in the world and mobilizes the Pro-Life Generation to confront abortion at the local, state, and national levels daily. Every week, Students for Life entities reach more than 2 million people across social media platforms to have nearly 200,000 digital conversations with the most engaged pro-life online audience in the world.