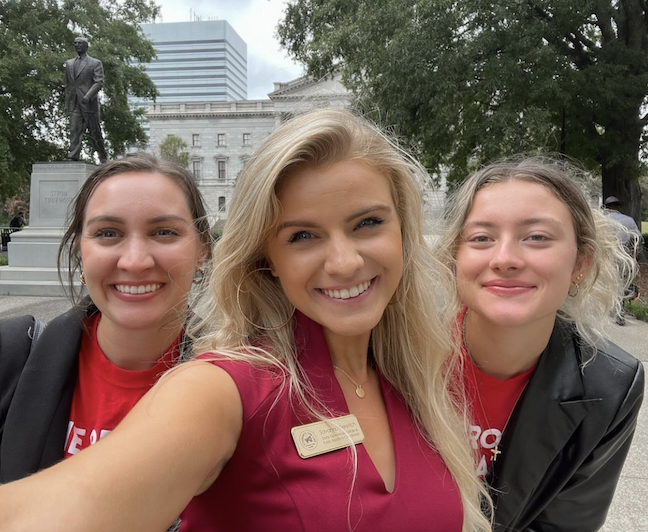 You see, in addition to our work on college campuses, we’re spearheading passage of pro-life bills across the nation. In Oklahoma, it was our team that helped draft the legislation, and our team that put pressure on the legislature to pass it.

Thanks to your prayers and support, Students for Life Action was the only national pro-life group on the ground in South Carolina. And while there, I personally faced the brunt of the attacks from pro-abortion radicals.

A group of pro-abortion activists from Planned Parenthood showed up to counter-protest our pro-life rally at the South Carolina capital and immediately started screaming at me.

They made vulgar gestures and verbally assaulted me. I’m just thankful for the added police presence which deterred pro-abortion protesters from getting physical.

My name is Savanna Deretich. I’m a former Students for Life leader and, over the past several months, Kristan has sent me to dozens of state capitals across the nation to organize our student leaders to lobby legislators to pass Life at Conception  and other laws that will either completely end all abortions or severely limit them.

Pro-abortion radicals know they’re losing the argument over abortion. So, they do everything in their power to intimidate pro-lifers in attempt to shut us down and shut us up. But I have some bad news for them… Students for Life Action will NEVER back down!

Despite their efforts to intimidate us, we’ll continue to ramp up pressure on South Carolina politicians to pass this bill that will ban all abortions, period. With the reversal of Roe elected officials are no longer able to hide behind the excuse of pro-life laws being overturned by the courts. 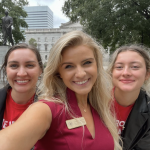 That’s why Students for Life Action is working to encourage our elected officials to be courageous and vote to protect innocent children from the moment of conception… when science proves life begins. And the pressure is working!

As I mentioned, after countless phone calls, emails, and lobbying efforts at the South Carolina capital and with immense pressure from the people of South Carolina, the HouseJudiciary Committee successfully advanced H 5399 – a no loopholes Life at Conception Act.

Now the bill will go before the full House for a vote. But the fight is far from over. South Carolina is only one of dozens of states our team is actively pushing for pro-life legislation. It’s because of your support that Students for Life Action can continue its work toward saving the lives of generations of innocent babies. 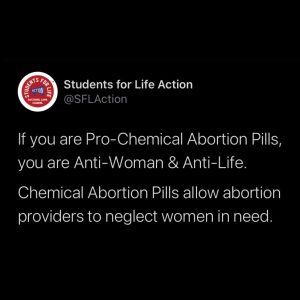 But our fight is still far from over and attacks like the one I experienced are becoming far too common. The radical abortion lobby is bankrolled by some of the wealthiest and most powerful people in the country and there is no limit to what they will spend to influence weak so-called “pro-life” politicians.

In fact, even Hollywood director Steven Spielberg and his wife contributed a whopping $50,000 to the Abortion Lobby’s efforts to strike down Kansas’ Value Them BothAmendment recently. The good news is, we don’t have to match Hollywood and the Abortion Lobby dollar-for-dollar.

The numbers are on our side. But it still takes precious resources to mobilize grassroots pro-lifers in states across the nation to pass pro-life legislation with teeth. Our voices are being heard in states like South Carolina but we can’t continue the fight without your help.

To join our “Protection at Conception” activism trips, CLICK HERE!